Japan Habba is an annual India-Japan cultural exchange program - the biggest of its kind in India. Initiated in 2004 and held in Bangalore every year, the event was conducted online for the first time in 2021 and this year it was held online on 8th, 9th & 10th April 2022. The primary focus of Japan Habba has always been to encourage cultural exchange and introduce the fascinating culture of Japan to Indians, while also acting as a creative outlet for students of the Japanese language and enthusiasts of Japanese culture.

SOLIZE India was one of the Diamond Sponsors for this year’s Japan Habba. With over 20+ events covering Japanese culture, language, anime, jobs and industry, the event saw enthusiastic participation with over 11,100 live views over three days, with majority of the viewers from India and in the diverse age group of 13+ years to 55+ years.

The Live short extempore style speech contest ‘120 Seconds’, introduced for the first time in Japan Habba 2022 was sponsored by SOLIZE India and saw enthusiastic participation from many speakers, talking on topics of their choice from a set of pictures shown to them.

The pre-recruitment session ‘You're Hired’ was a great platform for various companies to give an overview of their back-ground, their offerings, current people requirements and some of the points which job aspirants can keep in mind while considering the job-openings in the respective companies. A wide array of Japanese companies in India participated in this event and SOLIZE India was represented by Mr. Rajesh Jaganathan (Senior Manager) and Mr. Abhilash HM (Manager- Human Resource). The session was interactive with audience asking many pertinent questions at the end of the presentation and showing keen interest to explore the job postings discussed during the session.

This year, the core focus of the organizing committee was to further expand Japan Habba to reach a truly national scale, and to do so while embodying the spirit of the 70th year of diplomatic relations between Japan and India. This was achieved with 3 special events introduced this year, namely Japan Next Door, Ikoku and Upanivasa. Ikoku and Upanivasa were events introducing the lives of Japanese people in India and of Indians in Japan, in the form of a documentary showcasing how their lives have changed after moving to either India or Japan. This was followed in turn by a live Q&A session, featuring YouTuber Mayo and the first Asian-origin to hold political office in Japan, Mr. Yogendra Puranik (Yogi-san). The interviewees interacted with the live audience by responding to questions on the YouTube chat.

A three-part event, the first segment of Japan Next Door introduced the audience to various organizations engaged in the promotion of activities related to Japan and Japanese from cities such as Delhi, Mumbai, Pune, Kolkata, Chennai, Hyderabad, the states of Nagaland, Meghalaya and Bangalore.

This was followed by two panel discussions: one on the influence of Japanese Pop Culture featuring Tarun Saini of AnimeTm, Dota 2 Cosplay World Champion Rohit Kailashiya, and others. The other discussion on Japanese Language and Traditional Culture, with prominent figures such as Prof. (Retd.) Prem Motwani, Amb. Deepa Wadhwa joined as panellists. In keeping with this year’s theme, waza, there were a number of workshops including Haiku, Animation (with blender), singing workshop (Utatte Mite), Cosplay, and Japanese Calligraphy (Shodo). The Karaoke contest was one of the major highlights of the event with entries from all across the country, and the Anime Quiz, Animathon also had a strong turnout.

A few highlights of the new additions and online debuts this year included The meme contest, A virtual tour around the Asakusa region of Tokyo, A myth explainer through the video game, Ghostwire Tokyo (Tango Gameworks), Pop Culture Hiroshima (Phase I): cosplay contest where winners go to Japan and Hayabusa: a speed kanji-writing contest for learners and non-learners alike.

The 2022 edition of Japan Habba was extremely successful and was a great platform for exchange of cultural ideas and showcasing the talents of the participants. Please visit https://www.youtube.com/JapanHabba to view the recordings of the various events conducted during Japan Habba 2022. 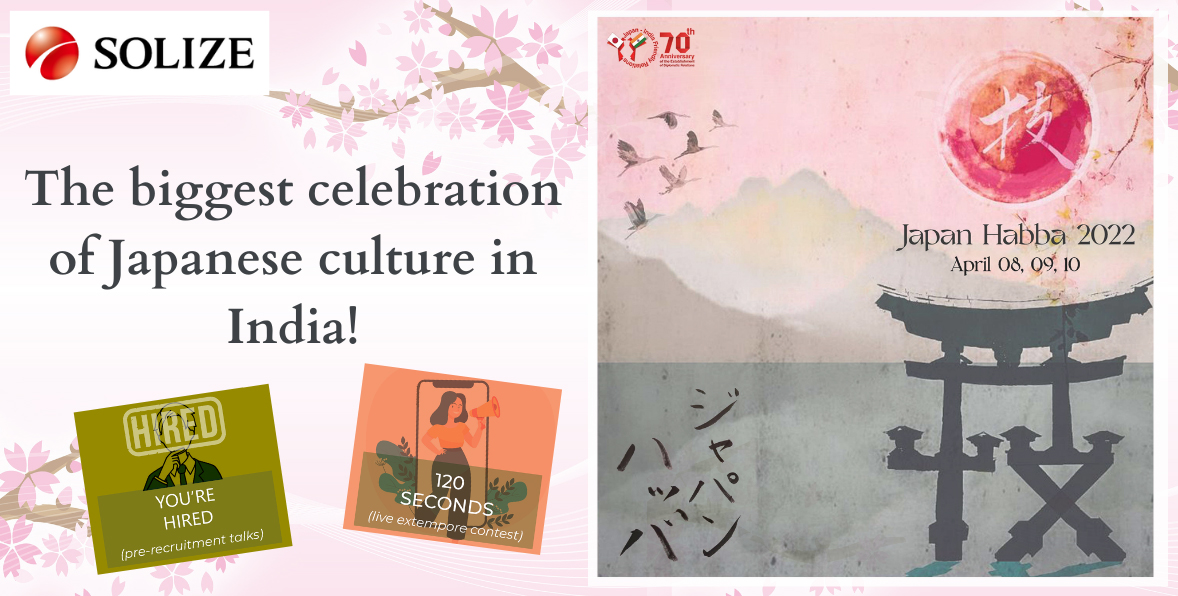